We asked six artists about their relationship with the food in their fridges during quarantine and here’s what they had to say.

Without going to restaurants, catered celebratory events, and family/friend meals, it’s inevitable that our relationship with food has changed during quarantine. Especially when responsibilities such as commuting, in-person socializing, and working in offices have taken less of our daily brain power, many have shifted focus onto their eating habits – some learning how to cook bread for the first time or even how to grow their own food. With so much media focus on artist’s projects and mental health wellbeing, AdHoc decided to check in with six musicians about their food intake during self-isolation and see how daily life may be impacted by any dietary changes.

Both Susannah Cutler from Yours Are The Only Ears and Jason Balla from Dehd have found solace in experimenting in the kitchen, specifically getting in touch with the food they’re consuming and connection to nature. Though she’s moved from her co-op living and has since down-graded to a smaller kitchen, Jourdann Fraser has also been reigniting a passion with food with so much extra time and mental energy to take up baking as a pastime.

On the other hand, artists including Asoh Black! and Rachel Brown from thanks for coming have had trouble feeling creatively inclined in the kitchen, due to food shortages and limited trips to the grocery store. Similarly, Emma Lee of Earth Dad/Eliza Moon/the booyah! kids sees the kitchen as an extension of the common space rather than a place to experiment with recipes.

Regardless of how these artists have adapted, they have treated their food intake differently nonetheless, and speak about feeding oneself as more of a project than responsibility.

Susannah Cutler (Yours Are The Only Ears)

“I hope to make growing food a more permanent part of my life going forward, whatever that looks like.” 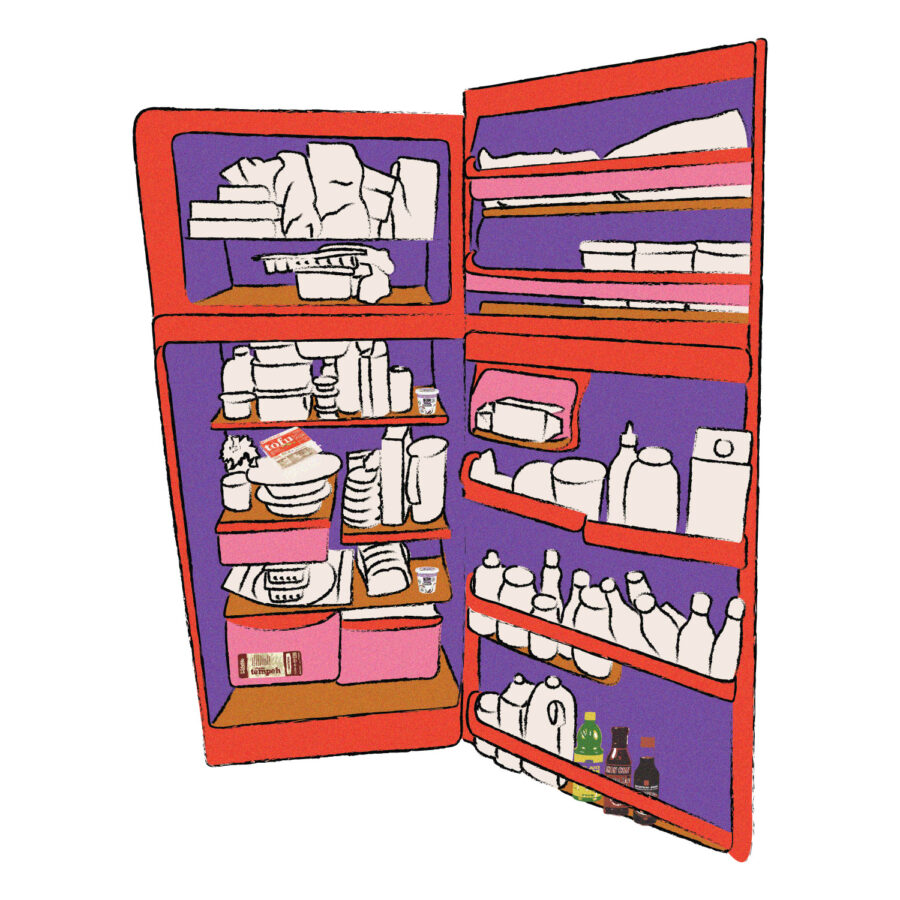 “[After quarantine,] my partner and I quickly realized, “wow, we kind of suck at [cooking food], let’s try and get better by using actual recipes and not just winging it every night.” I have been spending more time in the kitchen, and it’s been really nice. I have been experimenting with cooking/baking with intention, like infusing your food with how you want to feel after you eat it and using specific herbs for that reason.

I’m growing my own garden for the first time this year. I used to live and work on farms around Georgia and think I wanted to be a farmer. I didn’t really have the stamina for that lifestyle, and I missed making music and art, so I gave it up. I feel that urge coming back to me now though, and I hope to make growing food a more permanent part of my life going forward, whatever that looks like.”

“Ideally when I get my first crib it’ll have a whole garden in the back… that would make me feel invincible.” 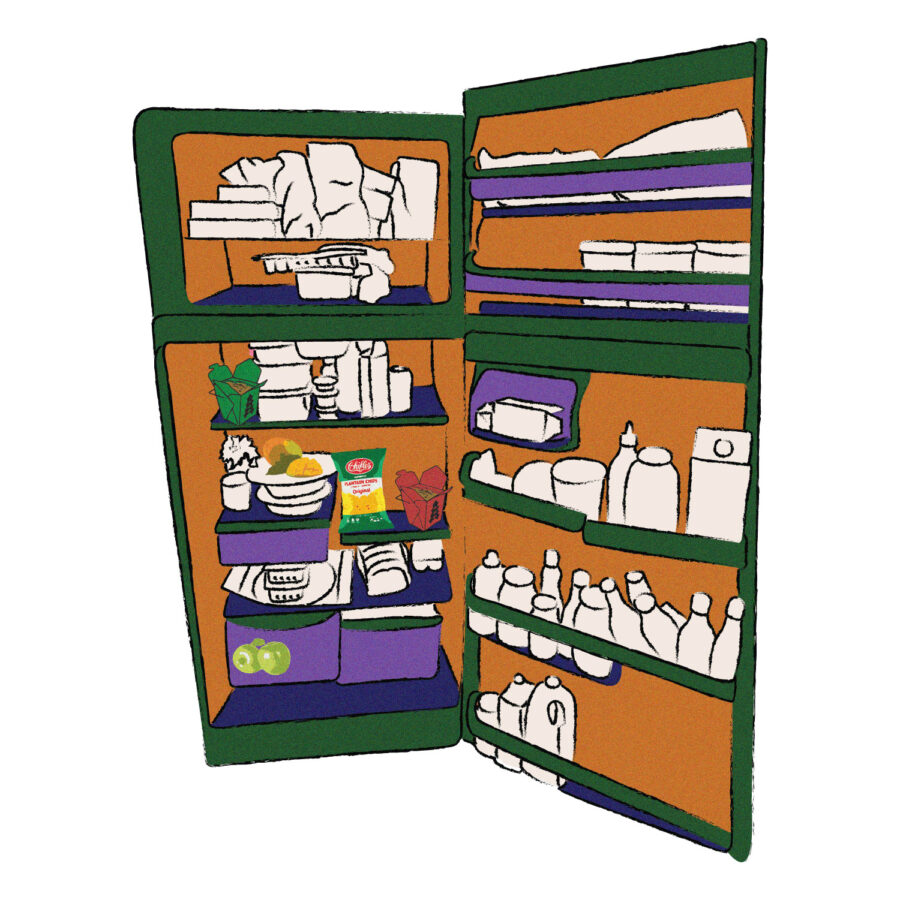 “Plantain chips from Ock have been my best friend. I can’t even lie to you.

I share my fridge with my family, but we’ve always known to look out for one another so if I’m eating I make enough for others and vice versa. It’s not hard to be “organized” in that manner, but then again, I’m out here ordering usually anyway.

Ideally when I get my first crib it’ll have a whole garden in the back. That would be nutty. Imagine growing your own fruit?! Nah, that would make me feel invincible. Constant mango craving? Done. Need green apples for the living room so that if a company bites into one while your back is turned they don’t accidentally chip a tooth on a fake decorative piece? Done. Need the house first. It’ll come soon though.”

Rachel Brown (thanks for coming)

“I like cooking, but for me, food is such a communal and family thing that if I have no one to share it with then I’m not really cooking, I’m just making sure I’m staying alive.” 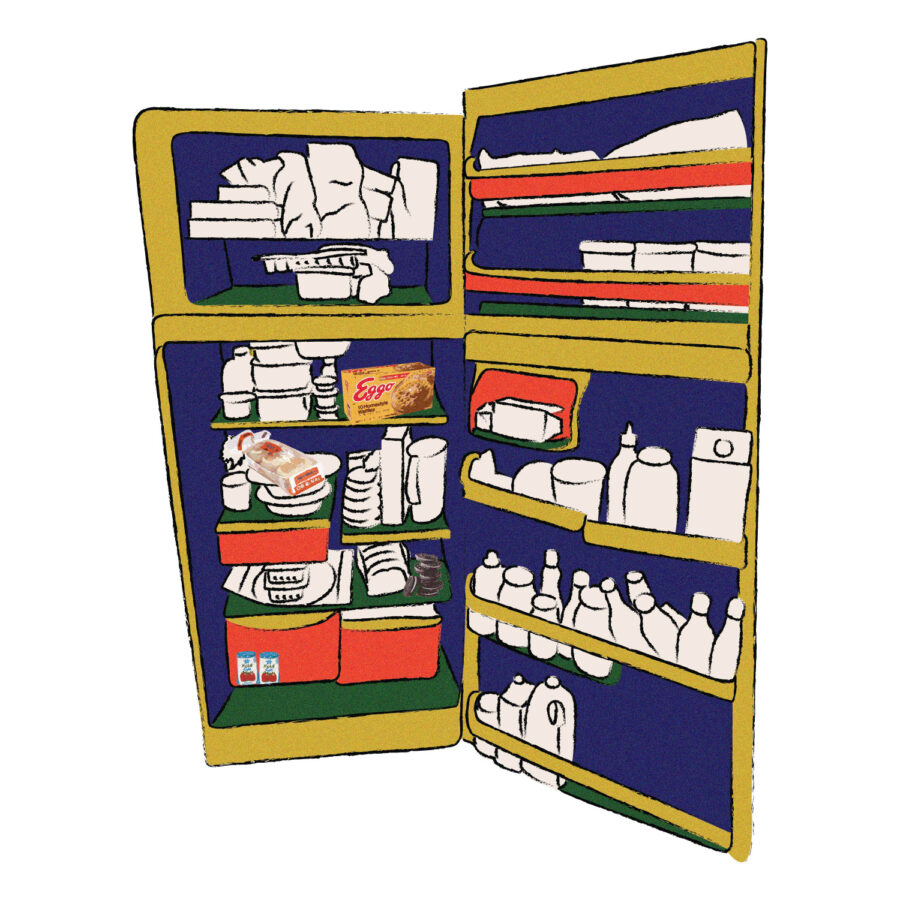 “Since the beginning of quarantine, I think I spend the majority of my day just wondering when it’s okay to go ahead and eat again. I mostly just question if enough time has passed for me to eat my next meal. I love shoveling ice cream down my throat, dunking Oreos into milk and just funneling them into my mouth, one after the other, until an entire row is gone.

As for what I eat outside of sugar – almost every morning (usually afternoon) I eat two english muffins and a yogurt. I also rediscovered Eggo waffles during quarantine. I haven’t really eaten breakfast regularly since I was in high school, [so] I guess it’s cool that I eat more than one meal a day now.

It’s hard to make exciting food when you’re just cooking for one person and want to make your trips to the grocery store as infrequent as possible. I like cooking, but for me, food is such a communal and family thing that if I have no one to share it with then I’m not really cooking, I’m just making sure I’m staying alive.”

“For now I chop my vegetables, knead my dough, and all the while, I feel part of something bigger and older than myself, just taking it slow.” 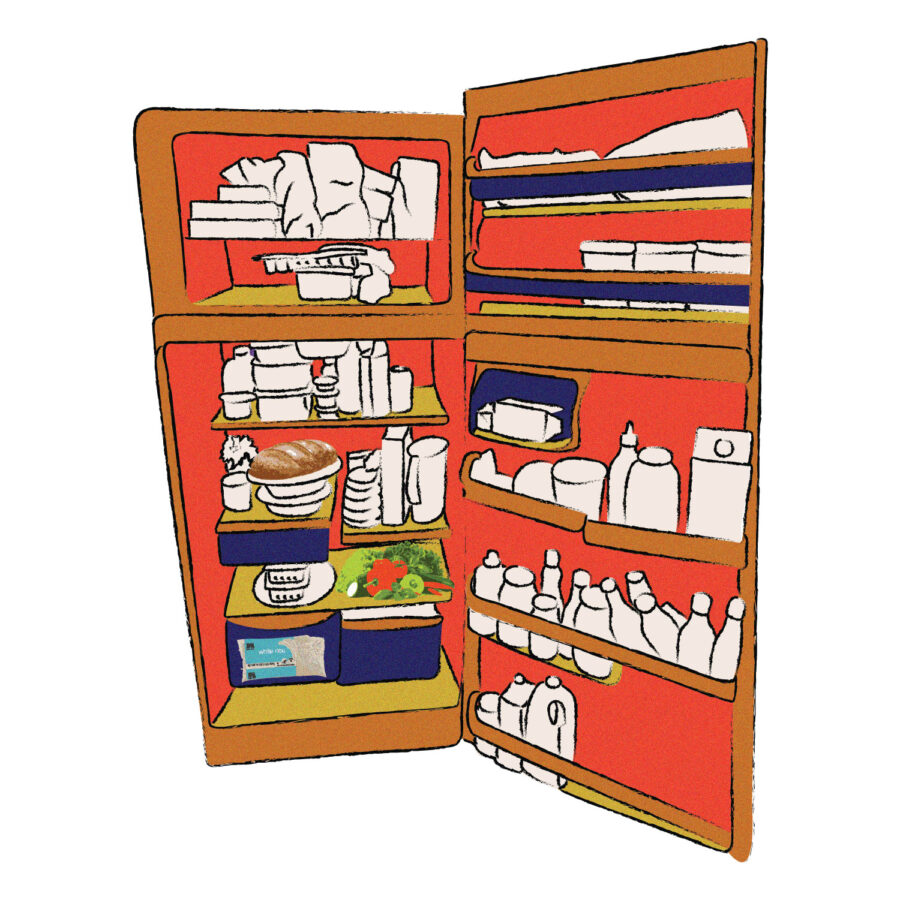 “This quarantine I’ve been spending a lot of time in the kitchen. Some days it feels like I’m holding my own audition for the next bon appetit internet chef. But aside from expanding my repertoire of white rice and veggies, I’ve been experiencing the connection between food, history and tradition.

The more time in the kitchen, the more I noticed this simplicity and its [relation] to nature. When I tried my hand at fermentation, inspired by my favorite internet personality Brad Leone and the book The Art of Fermentation, food and nature were even more entwined. I was taking part in a process passed down through generations and one that told a story of people. [Fermentation was] before refrigerators and food preservation, and whole towns would come together at the end of a harvest and help each other to make it through the winter. It’s a process that relies on the bacteria literally everywhere around us. It’s a funny thing to be reminded of at a time when we’re so fearful of viruses and bacteria. Bacteria is our friend.

Time travelling and ancient wisdom aside, it’s been rewarding to make things that taste good. It doesn’t take a whole lot of tools either. Just a little patience and time. The kind of time our ancestors had and the same kind of time I’ve now found myself, without all the running around, constant touring and that feeling like “I need to be somewhere, now!” in the back of my head. I’ve got time to cook and time to watch The Sopranos in its entirety. So for now I chop my vegetables, knead my dough, and all the while, I feel part of something bigger and older than myself, just taking it slow.”

“The kitchen is a place to retreat for snacks, but also for warm company.” 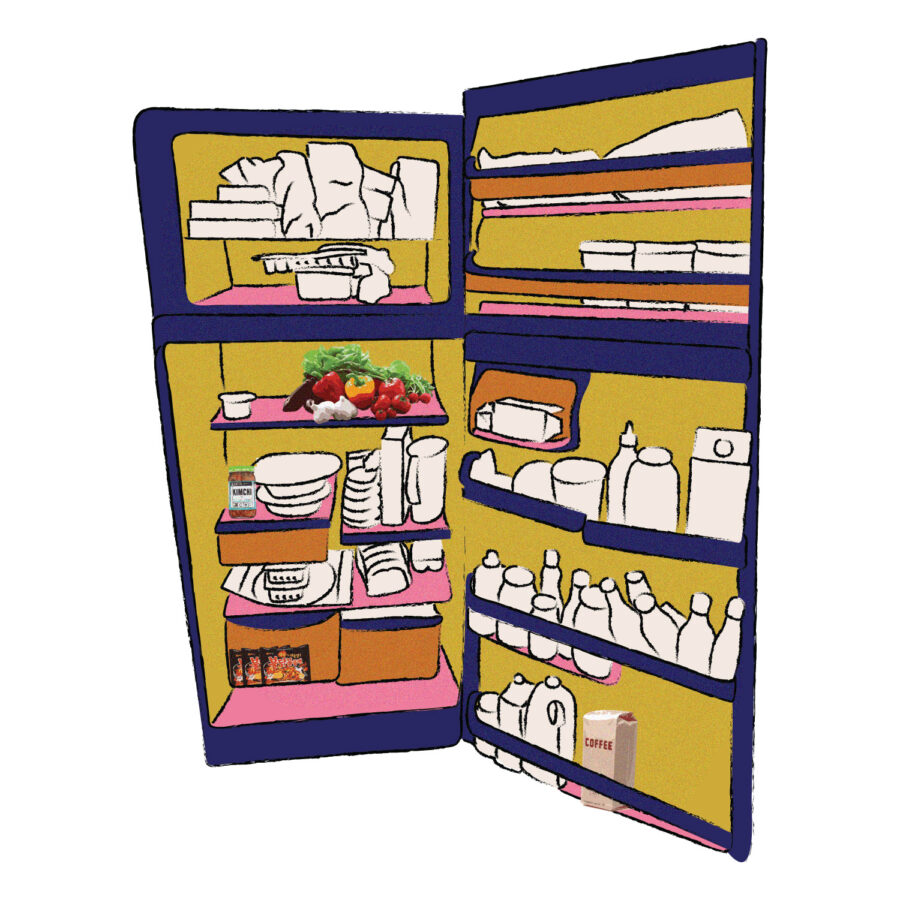 “[My main food staple is] coffee. Every day feels the same walking into the kitchen for coffee but I don’t mind that; I really enjoy that cup of coffee. Kimchi is [also] a staple, forever and always.

I share the fridge with my family, so there are many different and shared tastes that live there. I’m in the kitchen watching my dad conjure up something mystical with vegetables, or drawn into the space by the smell of spicy packaged ramen. The kitchen is connected/ in/ equal to our living room, so going into the kitchen is largely a social, familial hang. The kitchen is a place to retreat for snacks, but also for warm company.”

“I’m trying to find more excitement in what I’m eating but it’s hard.” 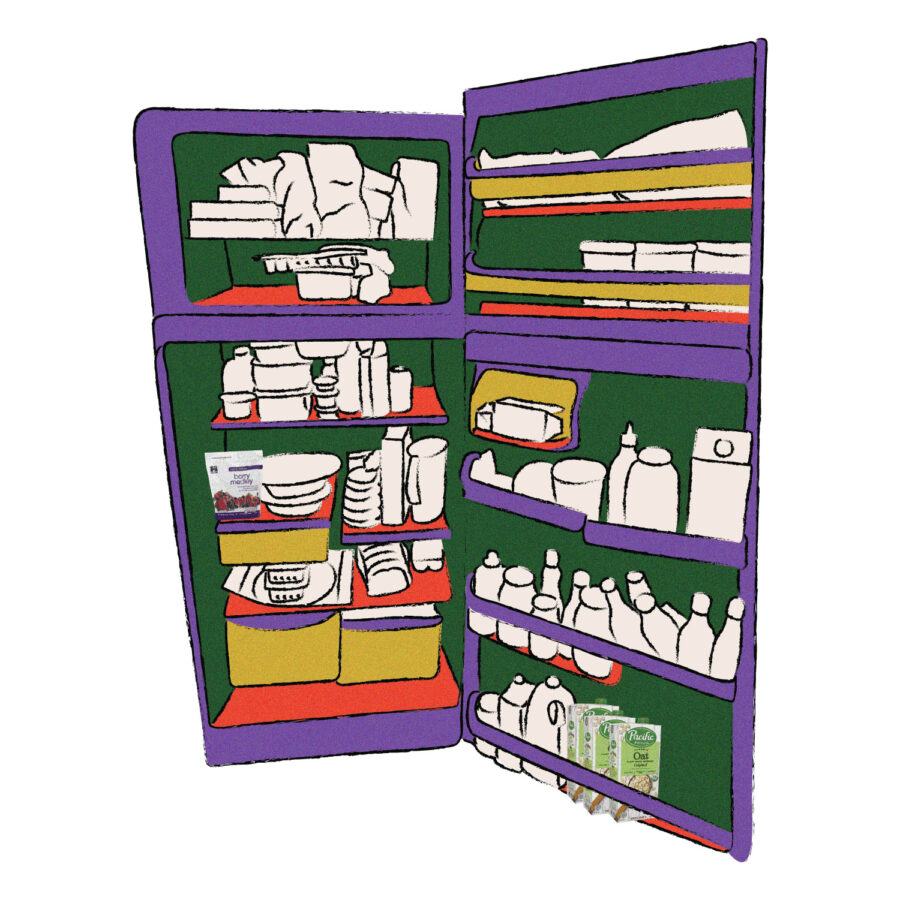 “Prior to quarantine starting, I was living in a college dorm where I participated in co-op living. I had access to 3 huge fridges filled with a ton of ingredients to experiment with when making food. It made eating and cooking an exciting experience where I could collaborate with my fellow dorm-mates on what to cook for lunch.

I’ve since moved back home with my mom, where we and our new roommate share a tiny kitchen space. The sheer amount of different types of food that I can eat have greatly changed since this move. Due to the shortages in the beginning of quarantine and the limitations of what’s in my fridge, food has become a bore. I’m trying to find more excitement in what I’m eating but it’s hard.

One thing that I have been doing that’s fun is baking. I love making treats that I can snack on during the day or late at night. We have a huge stash of oat milk in our fridge downstairs because we go through at least two cartons a week due to making smoothies or having a nice cup of tea in the morning.

Overall, my relationship with food has been complicated since quarantine started, but I’m trying to find small ways to reignite my passion for cooking and eating.”