On All Or Nothing, the post-punk trio pair lyrics about personal trials with driving synths to show us how life can still be enjoyable, even in the midst of chaos.

It may seem a bit flippant to be talking about clubbing and music right now, given that everyone from the World Health Organization to the Center for Disease Control is recommending that we practice social distancing. But no one knows the importance of maintaining a light-hearted attitude during hard times like UK dance-punks Shopping. Across three releases, they’ve highlighted the radical importance of enjoying yourself even when the world gets chaotic—one confidently chanted refrain at a time. Their latest, All or Nothing, once again centers music as catharsis; it’s about “living your life in a world that feels really unstable,” says bassist Billy Easter.

Shopping is referencing both political instability—like Brexit—and instability on the personal level. “For Your Pleasure”—a propulsive track that encapsulates the band’s new, more pop-inspired direction with catchy choruses and sleek synths—wobbles between desire and dissatisfaction as Easter backs guitarist Rachel Aggs’ vocals: “I am free / Never lonely / I’m your one / You’re my only / But I still lose / The feeling.” While politics will always be a facet of their music, All or Nothing sees Shopping turning inward to wrestle with how they are navigating life. The album cover⁠—a photograph of a ruin (pictured above) shot by Easter at Lake Elsinore in California—alludes to this personal focus.

“A lot of the album is about walls and barriers that we put up against ourselves in life, where you think things aren’t possible because you’re stuck in these constructs,” Easter said of the image. “That scene demonstrated that, in fact, you could just walk around the wall.”

It’s valuable advice from a band that, even scattered across the world—Rachel Aggs and drummer Andrew Milk are in Glasgow, while Easter is in Los Angeles—is able to find commonalities in their experiences. As we all hunker down in our homes to wait out this pandemic, it’s important to remember that walls can be broken down—or even danced around.

Read the rest of our interview with Easter below, and check out Shopping’s new album, All or Nothing, which is out now via FatCat Records.

AdHoc: You’re all living in different places now, and have other musical projects. How do you decide when to get together and write new music as Shopping?

Billy Easter: Over our time together, we’ve accidentally stuck to this rigid two-year schedule, where we release an album every two years on the dot. That makes it easy in terms of scheduling because it means that we need to write, record, and then, a year later, do a lot of touring. We all know that it’s our main priority, and we just work around it.

What does collaboration look like now that you’re all in different cities?

Prior to moving to L.A., I was in London. The other two had moved to Glasgow anyway for the last album, [2018’s The Official Body]. Then I moved, and we thought maybe we would try and write separately and share files over the internet. But we didn’t do that because it seems like the only way we really can write is when we’re all in a room together. A lot of it is because our lives are so busy, and none of us sit down and write parts separately. But when we’re together, we’re like, “Okay, this is the mission.” That seems to be a winning tool for us.

Where was the majority of this album written?

A couple of songs⁠—I think “Initiative” and “All or Nothing”⁠—were written when we were in Seattle. We had been on a West Coast tour when we played San Francisco Pride in 2018, and the others flew over and we started the tour in Seattle. We were staying in a friend’s basement and wrote a couple of songs there. The rest of them⁠—we’re a bit confused about this ourselves⁠—I think we wrote them in London and Glasgow over a ten-day period back in February last year.

When did you all decide that the album would be called All or Nothing?

I think the song actually had a different name when we wrote it—it was called “What Are the Chances,” or something. There were a few contenders for album titles, but that was the one that stuck. I think one of [the other contenders] was “No Apologies,” but then we were like, “That’s too emo.” Andrew’s wearing a “No Apologies” T-shirt on the gatefold picture in the middle of the album, and so we were thinking about that. 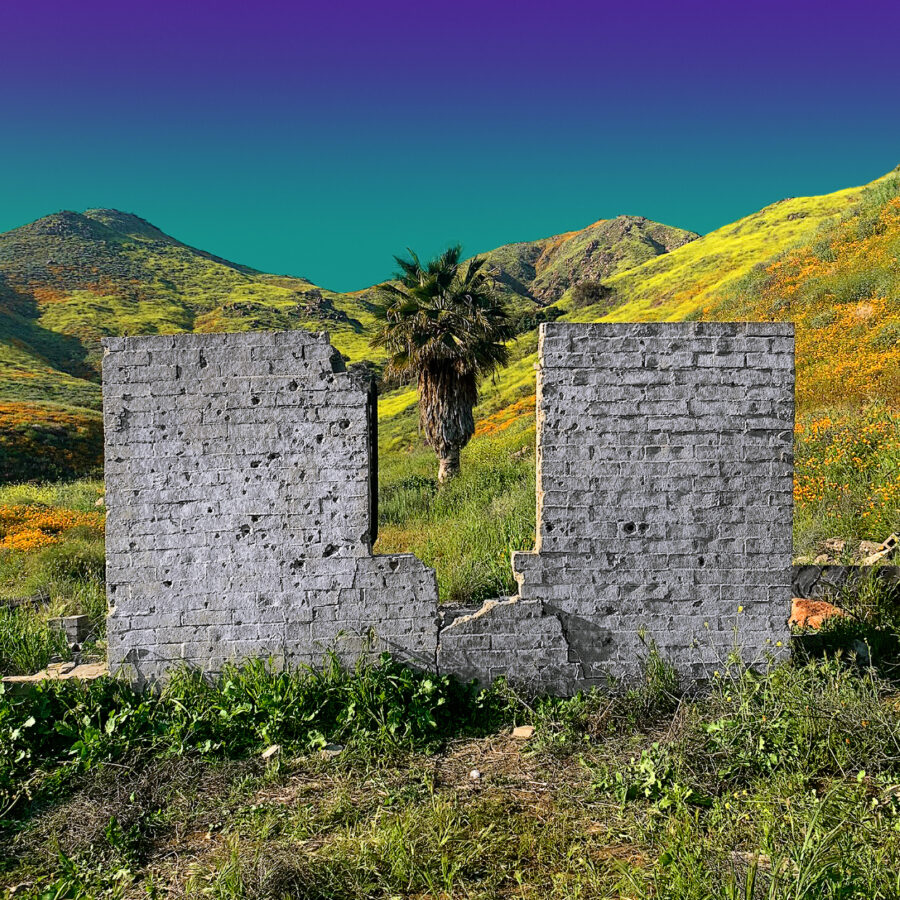 Since we’re talking about the visuals behind the album, could you walk me through the album cover art?

Yeah, I did that. It’s a place called Lake Elsinore in California. Every year, there’s this big poppy explosion that happens there that everyone flocks to. I went there, and we went a different way, and there was this weird scene. The wall and the tree looked amazing, and I took a picture of it with my phone. I thought I needed to take a better photo, so we went back to take a ton more photos for the rest of the album. But the scene was much more overgrown and it didn’t look as good, so we ended up using the original photo I took on my phone.

I really liked it because a lot of the album is about walls and barriers that we put up against ourselves in life, where you think things aren’t possible because you’re stuck in these constructs. That scene demonstrated that, in fact, you could just walk around the wall. It’s about façades and feeling restricted. It’s like an illusion.

You said in an interview that you brought something very personal to the lyrics that made you interpret them differently than your bandmates. Is that how you intend people to listen to All or Nothing?

Yeah, definitely. I love that about songs in general. When we love a song, we get really immersed in it and it triggers emotions and stuff. It’s usually that we’re attributing it to situations in our own lives. For us, when we’re writing, it’s never really discussed what a song is about until we’re recording it. Often it’ll be about completely different things for all of us, but it doesn’t matter, because the language still works however you are listening to it.

You’ve said you wanted “For Your Pleasure” to be a queer dance anthem. Do you have any personal anthems?

There’s so many. Immediately what comes to mind is “Dancing on My Own” by Robyn. As a band, we have a few anthems like that. That Britney song, “DANCE Till the World Ends,” is also one of those songs where we’ll all just look at each other and run to the dance floor. Andrew’s got it tattooed. Also, Billy says one of her personal faves is Saint Etienne’s “Only Love Can Break Your Heart.”

I really loved the “For Your Pleasure” video, and I know you were a producer on it. What was your vision for the video?

Mainly that sort of anthem element. We’ve never done a “cool” video that was a club-kid kind of video. I’m really into that—a lot of my past is that kind of vibe. My friend Lessa and I made it together in L.A., and we immediately had exactly the same vision for it. We got really excited about it, and it was really fun to do. We filmed it at The Smell in L.A.

The ideal night out is hanging out with friends and then going out to a club late and just dancing loads. I feel really at home in the atmosphere where the music is really loud, you don’t really need to talk to anyone, and there’s chemistry with everyone in the room, and you are just dancing and getting lost in it. I find it really comforting.

When I was a lot younger, I was a club kid, and I used to go to pretty groundbreaking clubs [in London] at the time. There was one called Club Smashing, which was full of freaks and weirdos. It had this light up dance floor, which is in the Pulp video for “Disco 2000.” A lot of my friends were in that, but I couldn’t be for some reason. There were some other clubs like Club Skinny, and then my friends and I ran a club called Club Kitten. You could be any way you wanted to be; no one wanted an explanation or anything. It was just anything goes.

In a previous interview, you all said that you wouldn’t mind being a pop band. Do you think you are making steps towards that with this album?

It definitely does sound more poppy than our other albums⁠—mainly because it’s fuller and there’s more synth. It’s faster, in a dancey way. I think anyone listening to our first album would find it more minimal and stripped-back.

But we’re not going to suddenly turn around and be pop-acts, dancing with Madonna mics—you know? We like to make the music that we make, which I guess is post-punk, but with a real drive behind it that doesn’t alienate anyone. We aren’t about being so stuck in a genre that people are like, “That’s not for me—I don’t know what that music is.” We aren’t really bothered about where it fits; we just want people to enjoy it.

Now that the album’s been released, what is your favorite song off the project?

“Follow Me” is my favorite song off the album. I just think it’s really catchy. Rachel’s melody that she’s singing—with “Follow me, follow me”—gets stuck in my head all the time. I like how it’s such a prevalent thing in today’s society⁠: All anyone wants is to be followed on social media. It means so much, that it actually means nothing. I love [how the words “Follow me, follow me” have] this childhood nursery rhyme charm.

I know that Shopping has often been touted as a political band, but for this album, that political message seems less pronounced. Was that deliberate?

I think in actual fact we haven’t really changed. It’s always been a mixture of political and personal, because they are intrinsically connected anyways. If you live in the world, you will have politics affect you.