We caught up with frontman Ian Devaney about the Brooklyn synth band’s long-awaited debut record, which is out today.

No band seems to be mentioned quite as much around Nation of Language’s music as New Order, and no track on the Brooklyn new wave trio’s debut record—Introduction, Presence—seems to channel New Order quite as much as album closer “The Wall & I.”

“We definitely love New Order, and I would say ‘The Wall & I’ is one that is particularly indebted to New Order,” vocalist Ian Devaney confirmed to AdHoc in a recent interview. “As far as other ‘80s synth bands, I think Human League was a big influence on this first record, and Orchestral Maneuvers in the Dark as well. But then there’s also a lot of more modern synth bands that influenced us. There’s Neon Indian, LCD [Soundsystem], Black Marble. Lots of different things going on.”

The trio—rounded out by keyboardist Aidan Devaney and bassist Michael Sui-Poi—released Introduction, Presence on vinyl earlier this spring, as planned, but pushed the digital release to today, May 22. “The first words that come into my mind are driving and melancholic,” Ian says of the album, which sees the Brooklyn band transforming loss and longing into 10 stirring, soothing synth-pop arrangements.

We caught up with Ian by phone a few days ago about his experience writing and recording NoL’s debut record and his decision to hold out on virtual gigs in favor of an IRL record release show later this year. He also told us about his favorite Bushwick venues and Beirut songs. Read the full interview and listen to Introduction, Presence below.

Ian Devaney: I feel like I can [only] speak to our place in it. I had, in my early 20s, come up around the Shea Stadium world. And then when I came back to New York—partially ‘cause of living a little bit further away from Bushwick—it felt like that wasn’t where I was going anymore. I felt like I had to find a new place for us to be, especially as a band. We didn’t really know many other bands for a while until we started repeatedly running into the same bands at shows that were randomly thrown together by people.

Who are some of the folks you kept running into?

One was Plain Dog. We played a number of shows with them and I actually ended up playing bass in [that band] for a while until our singer and lead songwriter Russell [Efros] passed away and the band dissolved. Miracle Sweepstakes is another band that we would run into. And bands like Hypoluxo, Peel Dream Magazine. You build relationships the longer you live here.

Are there different venues and institutions you associate with the scene now versus then?

Now, I guess, it’s like Alphaville, Trans-Pecos, Zone One. I feel like it’s less about a specific venue in my mind and it’s more spread out around Bushwick. We’re in Lefferts Garden. We’ve always lived here.

When you dropped your video for “The Wall & I” you wrote, on Facebook, “Fuck it… even if we could make the video we want to make right now, this is probably the video we should be making.” Can you tell us a bit about this song and visual?

We had seen that banner blowing in the breeze and Aidan went to take a video of it just to have for ourselves. Then we showed it to our manager and he was like, “Why don’t you just do, like, six minutes of that and then you can make it a music video?” And I was like, “That sounds like a great idea!” 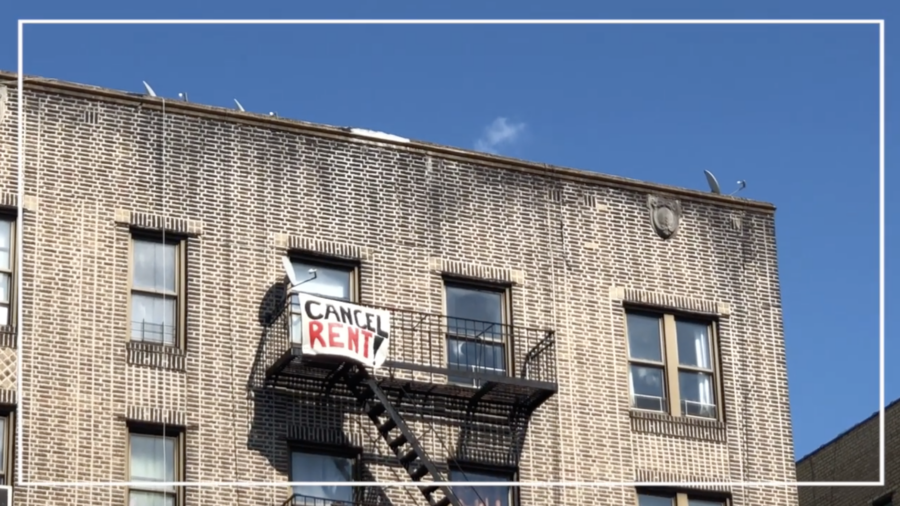 It really was a fuck-it moment—feeling so restrained, creatively, in the sense that we can write while we’re at home but [wanting], especially with an album on the way, to be creative in a way that extends beyond your own apartment. That’s where all the writing and creation of the first album took place. You want to be able to do something else. [We were] being loose with the idea of what a music video is supposed to look like.

The visual and the song are pretty separate in my mind. The song deals in loss—there were people that I’ve lost in my life who were in my mind when I was writing that song, and then others who were lost in the way people drift apart over time. There are often ways that you wish you could be with these people again but it’s not always realistic.

One of the bands that comes up the most around your music is New Order. What are some other ‘80s synth or new wave projects that you hear in Nation of Language?

We definitely love New Order, and I would say “The Wall & I” is one that is particularly indebted to New Order. As far as other ‘80s synth bands, I think Human League was a big influence on this first record, and Orchestral Maneuvers in the Dark as well. But then there’s also a lot of more modern synth bands that influenced us. There’s Neon Indian, LCD [Soundsystem], Black Marble. Lots of different things going on.

You said in 2018 that “Escaping the routines you develop for yourself when writing is the best way to keep things exciting.” Did you escape any routines in the writing or production of this album?

For sure—in the production especially. I went into the studio trying to be as “yes, and” as possible, like the improv saying. You never really know whether an idea is going to sound good until you’ve heard it. So in making the first album it was just us and the producer [Abe Seiferth] bouncing as many ideas as we could, like “Maybe we’ll try this, maybe this song we’ll make way longer,” just kind of exploring and spitballing.

Were you surprised by any of the tracks? Were there any that you felt were a big step forward for you?

I would say “The Motorist” is one. We had been working with another song to fill out the record and then with like two days left in the studio I was like, “I think I wanna get rid of that song and try this demo that I have called ‘The Motorist.’” So we just dove in. That’s one where the original version was quite short and I was like, “I could see [us] zoning out and letting this song ride for a while.” So that’s a song that I think benefited a lot from [our time in the studio]. Now it’s one of the longest songs on the record.

You’ve also said that “Listening to Beirut is really an immersive experience because he has built this sonic world for you to live in,” adding “I strive to create a similarly immersive effect with my own music.” How would you describe the sonic world of Introduction, Presence?

Mentioning Beirut, there are some songs where you just want to shout the song out the window and sing along to it and at other times, when you’re depressed, it’s just very heavy and makes you want to curl up into a ball.

Do any Beirut songs come to mind in particular?

It’s a very distinct form of expression to me than the writing and recording. It’s almost like there’s a delineation—that’s one thing and this is another. It’s one of the few places in life where you can just shout as loud as you want. And instead of everyone being terrified of you it becomes a joint moment with you and the people around you. I think the songs kind of change from the album to the live show, so being able to experience both forms of them really helps flesh out the idea of what the band is for people.

Do you think there’s something different between the virtual gigs that are happening right now, due to COVID, and the type of in-person live show you’re describing?

I think so. There are certain bands that have managed to do very well in this current, hopefully temporary format online. As far as us, I haven’t found a way to do it that honors what I think the live show is. So we haven’t done any of those for this band at this point.

It’s been a good time to write—[that’s] one thing we’ve been up to. [I’m] also realizing that I tend to be someone who has a difficult time just sitting and, say, watching TV or something without thinking, ‘I should be working on music’ and feeling guilty about it. So that’s something that we’re coming to terms with. We have the whole day available to us. I don’t have to feel guilty about not working on music every second of every day in a crisis.